I wasn’t envious of them, I didn’t want what they had. I was annoyed because all they talked about were their kids. It sounds like a silly thing to be annoyed at, but I had gone through, was going through, so many difficult things to do with having a baby I just couldn’t take it.  Year after year I sat down at the table with Alan and the other men at the annual neighborhood block party. We drank and I watched the moms playing with their kids. I felt withdrawn and slightly depressed. Like none of the women could understand me and I couldn’t understand them. Yesterday I was a mom too, following Jack and Fiona everywhere while they put bubbles in their mouths, ran this way and that, Alan would stick by one and I would stick by the other. I had brief conversations with the other moms, mostly saying things like, “This is so hard.” It was fun to be with my neighbors, to see all the kids together. It’s not the type of neighborhood where kids play together outside, mainly because everyone is so busy. It can be very isolating. So it was nice to connect.

I feel so different now. My role of MOM is really setting in. The things that stressed me out a few months ago, the constant cleaning up, baby not taking a scheduled nap, cranky babies, changing a million diapers, don’t even cause me to flinch now. It’s as if I’ve built up my endurance as a housewife and a mom. I’ve learned a lot about taking things in stride, being flexible, and most importantly only doing what I can! I’m still working on not feeling bad about the things I can’t do or are too tired to do. I know in the bigger picture many of these things I worry about don’t even matter. I’ve definitely still got work to do, but I am proud of how I’ve changed and adapted to new challenges. 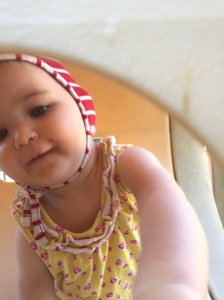 It’s hard to believe its summer. Today was really hot. I took the babies to the park first thing in the morning to play. It was super fun and we met some other kids there.  I’m really growing fond of our little park. I’ve met several other fifteen month olds that live nearby. I hope I meet some cool parents too! Today it was a nanny with the kids but she was really cool. I painted for a while today and it felt great, but I’m kind of tired because I actually did a ton today. First the park, then took Billy for a hike, then Yoga, then I gave Billy a bath and played with the babies outside in their blow up bath. I don’t know how much painting I’ll get done in the next couple of weeks either. My new nanny starts Monday and we’re planning on taking Fiona to Early Start on Wednesdays. I am also diving into learning sign language when Heather starts, especially because she’s doing it with me! I just want to really focus on teaching Fiona language and having fun with the babies!