Oh god, I have cramps. But I put together the Little Tikes Half Dome all by myself! Jack and Fiona have been little monkeys lately so I got them something they can get a good climb on! “It was so easy to put together even a housewife can do it” I say as I accomplish the task. They mastered the climb up and down faster than I anticipated, which kind of sucks because it won’t stay challenging for long. Another $140 bucks! I had a feeling we should have just gone for the real deal playset and let them grow into it but I got scared with the 3+ or the WARNING CHOKING HAZARD! I hope at least we get a good year out of the thing. 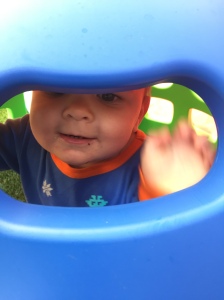 Yesterday we visited a new park, by the community center in San Rafael. It’s a beautiful park and has a cool little kiddie area. There is a large homeless population here. They sleep on the grass during the day. A lady behind us was taking pictures of herself and talking to someone on the phone at the same time, “I look fucken’ fat” she kept saying. “Oh here’s a good one.” I wondered who the pictures were for. Some type of down and out escort service? A boyfriend in jail?  As we walked into the park we passed by some men. They had a radio playing Reggae and one guy dressed like a sculpture of colorful rags was playing a guitar. I looked at them in acknowledgement, was going to smile, but when I saw their faces I turned and looked away. I had this strange feeling that they weren’t too friendly to women. I don’t know why I got that feeling, I just did.

As the babies played in the little structures and in the wood chips I was scared they might find something, like a needle or drugs and put it in their mouth. I kept looking to make sure I didn’t see anything. I think I’m permanently damaged. I was on a backpacking trip at Coast Camp in Pt. Reyes, another one of my FAVORITE places. It was the night of the fullest moon I had ever seen. We decided to trip on the beach. We were running through the sand laughing and having fun when and I stepped down and my foot landed right next to a hypodermic needle.  It was so disturbing, heightened by the state of our minds. Tony and I asked these questions to each other, “Was someone shooting up? Was it waste from a hospital?” Ever since then I’m hyper alert about people leaving drugs laying around and since Jack and Fiona put everything in their mouths it’s kind of scary. I don’t think I’ll be back to that park again. 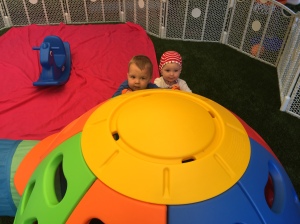 The way the mind works! I think I’ll use today as a studio day. I haven’t gone to Yoga since Monday. I was planning on going today but I don’t really like going the first day of my cycle. I think my time would be better used painting and taking a hot bath!