I think I blew Jack and Fiona’s minds. They watched me mix a grey acrylic and brush it onto a painting hanging on the wall. Then I added blue, overworking most of what I thought may have had promise when I first started. But it didn’t matter, I didn’t mind. I thought I was going to have another two hours of un-interrupted studio time. I put the babies down at 2:00pm, the standard afternoon nap time these days. They seemed tired, which was surprising because they did take a long morning nap. Jack was still fighting off the bug, I thought maybe Fiona was getting it. I set up my studio for painting, re-working a bunch of pieces. I tore up the old prints and paintings to make them new again, laid everything out, filled a tub of water, and began to think about my palette. I hear Jack scream, “MAMA”, which he’s began to use quite liberally. I go upstairs and I hear him scream. I go in the room where he’s sleeping and I hear a weed blower outside, it scared him. It is really loud, I can understand him being scared. He still seems tired so I bring him down to the nursery and put him in his crib. Back in my studio I hear him on the monitor, “MAMA.” I realize he’s not taking a second nap. I decide to bring him in my studio. He’s excited but wants out of the play pen. Then I hear Fiona on the baby monitor. So here we are. I tell the babies, “this is where I am when we’re not together.”  I start painting for pure fun, using bright colors, large shapes and collage. It’s fun sharing this part of me with Jack and Fiona. Most of the paintings don’t make the cut but I call them Baby Inspired and will continue to explore this path. 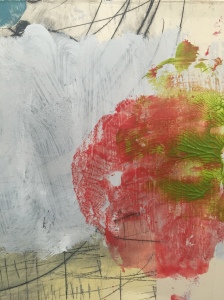 I finally feel like my worlds are merging. For years I’ve lived double and triple lives. Once the fertility stuff became an issue my life started to become compartmentalized. Even though much of my work was coming from my experiences trying to have a baby I couldn’t talk about it. At SFAI in my critique group we had to present our work to our peers. There were only eight people in the group. I don’t know why I was so scared.  I presented my stitched pieces I had been working on before I entered the program. They had everything to do with waiting, trying, doctors’ visits, how uncomfortable I felt with myself.  I got up in front of the group, presented my slides and froze. I couldn’t talk. The only things I could say were things that had to do with loss, but very vague. I relied on my descriptions on my previous series of work that all had to do with the loss of my mom. This was somehow easier to talk about than the loss of babies and my broken uterus. I am finally accepting that is part of me, my experience, and is reflective in my artwork. I want to learn how to talk about it out loud.

We Made it Through the Night!

Father's Day 2015 and thoughts on Language