I think they are awake. Just sat down with my coffee and toast. This time I have the bottles ready, they’ll be less time for screaming and crying. I’ll miss the Babbling when it goes. I think it’s so sweet. One time I made the mistake of taking Jack out of his crib while he was still babbling. He had Blue Bear in his mouth, I picked Jack up. Blue Bear fell back into the crib, Jack cried and cried. I won’t make that mistake again. I think they need that waking up time. There’s another raising twins tip!

Yesterday I received a gift. Linda from Early Start came to help me with the babies and work with Fiona. She gave us four hours of her time. I took Billy for a walk and finished the laundry. We also had time to work with Fiona and Jack on language, communication, and the word “No”. Linda has been teaching me sign language. It’s hard to remember, but I’m getting some. We are focusing on Fiona, trying to teach her there’s other ways to communicate besides screaming! 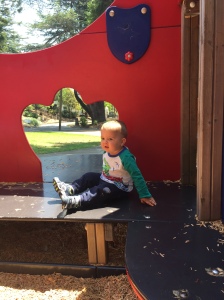 I took the babies to a new park in the afternoon. Boyd Park, it had been closed because the homeless had taken it over. The park was closed January 26th for “$88,000 in upgrades and to stop the cycle of abuse from homeless people who used the park for drinking and illegal activities.” The Marin IJ, Janis Mara. There was another mom there with a four year old boy. “Have you been coming to this park for a long time?” I ask her. “No, because of the Pit Bulls.” She says. “The Pit Bulls?” I ask. “Yes, the homeless people would bring their Pit Bulls, it wasn’t safe.” She says. It’s probably one of the most beautiful parks I’ve ever been to. It has big Oak trees, a gorgeous castle theme play set. A large grassy lawn. Stairs and trails. There were three homeless people relaxing on the hill. Their skin brown from sun and dirt. The mom and her son took a walk around the park and her son ran right up to the homeless.

Fiona’s still screaming this morning. I mixed regular milk with the Toddler Transitions. She doesn’t like it but is very hungry. I give her toast, cheerios, and a Happy Tot food packet and she stops screaming. Babies. They’re so funny. I’m so tired. I wish there was a way to stretch time. A way to spend the same amount of time with my babies, but also have downtime and studio time.

Fiona's screeming and establishing a regular chill out time with my husband, no babies, no TV.

Some Days you just can't make it outta the house.