Babies. I am so on the verge right now. Will you please take your nap? We’ve had a nice morning, just exhausting.  Breakfast, the park, more breakfast, playtime, bath, now I’m finally putting them down for their nap. It sounds like they’ll go to sleep. I know they are very tired. Last night I had to let Jack cry it out again. I think he’s teething. He only took his morning nap and he was so cranky all day I thought bedtime would be a breeze. No. He cried, I went down, rubbed his back several times. The last time Fiona was awake too, so I couldn’t hold him, it wouldn’t be right to do in front of Fiona, then she would start crying too. I had to just leave the room. He cried for seven minutes. I almost went down but I stopped myself. It was really hard and very draining. But effective. 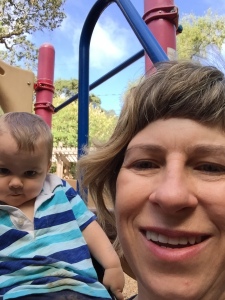 That’s a practice in itself, the ability to not get carried away with my babies emotions. Often times, like last night there’s nothing I can do to make things better anyhow. Jack needed to work through his own feelings. He did a good job and was able to self soothe. It’s really hard not to get drawn in and feel bad.

I think they are asleep now. YEA! I’m so glad. I really need a break. I feel my stress dissipating, my body is starting to loosen and relax. There’s nothing worse than when I put the babies down for their nap and they hoot and holler the whole time. I stand in place just listening to the baby monitor waiting for stillness, the beautiful sound I hear right now. With each screech I know they probably won’t be taking a nap and I won’t get my break. And they are a lot of work.

I wonder if it’s more exhausting to me because I’m 44? Would I have more energy if I were 34? My friends that are 34 would probably say no! They tell me how exhausted they are too. Some day we’ll recoup!

We’re going to a family BBQ later today. I had a little going away party for my nanny Ramona on Friday and the babies loved it. Jack was dancing, they ate and played all day. They like parties, but the problem is it’s at someone else’s house. People with grown children, so the house will not be childproofed. I won’t be able to relax like I did at my party! I’ll have to follow the babies around making sure they don’t put crazy stuff in their mouths. We won’t stay long, it’s too tiring!

My new nanny starts tomorrow, it’s really exciting! I think Fiona is going to thrive with Heather helping us. She’s already doing so well, even with one hearing aid! I feel like she talks almost as much as Jack.

Well it sounds like the babies are definitely down for a good nap. Time to give my Dog  Billy some love!

4:26 on a saturday afternoon