Yesterday the babies woke up bouncing off the walls. The first thing they did was take the childproofing off the edge of the fireplace. Jack, Fiona, and I had plans to hang out with Danny and I decided it better be something active, at least a trip to the park. By the time we were ready to go it was after 10:00AM so we decided to go somewhere with a drive so Jack and Fiona could take a short nap in the car. It was such a beautiful morning we decided to do a hike on Mt. Tam with the backpack carriers. On the drive up Danny and I caught up on our lives, we talked about Dad, the documentary, the babies. We passed cyclists out for their morning workouts, passing less and less of them as we got higher up the curving road. The fog thickened gradually until I couldn’t see very far in front as I drove. Out the side windows it looked like there was nothing, just a drop into a giant light grey mass. When we arrived to the Rock Springs parking lot Fiona woke up right away but we had to wait a half hour more for Jack to wake up. Danny took Fiona out and showed her the green moss on the tree trunk and the assortment of acorns, sticks, leaves, and pebbles on the forest floor. I started getting the packs ready, stocking the lower compartment with diapers, a change of clothes for each baby, water and food for all four of us. We sent Fiona in the car to wake jack up, he opened his eyes and a smile appeared on his face. I was afraid he would still be tired and start crying but he was only happy and excited. As I put him in the carrier he bounced and wiggled with a look of pure joy on his face. Billy was really excited too, she had been whimpering to get going the whole time we waited for jack to finish his nap. I set the giant back pack carrier with Jack in it on my bumper. I squatted down and put on the straps, straightened my legs and stood up, it was heavy, the weight moved from my hips down to the bottom of my feet. We started to walk, thinking I knew the way by heart. At the first trail intersection I second guessed myself so we walked back up to the map to double check, I took a picture this time! 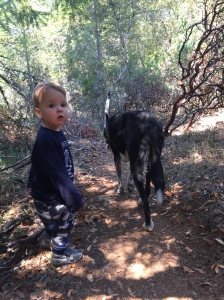 The first time I took this hike was with my mom. We loved hiking together. We headed out with a map but we still got lost! We used to argue about which way we were going, even though I have a great sense of direction my mom would always second guess me and we always got lost. But that was part of the fun. Our feet would hurt, our legs burning, panic started to take over, the sun would start to move creating shadows that moved across our red sweaty faces and under our feet. It was an adventure. I thought of this yesterday and decided that it wouldn’t be as fun with two toddlers, so Danny and I made sure we didn’t get lost. As we walked along the High Marsh Trail I pointed to the view, the fog was trailing the mountain ridge in the distance making its way to the sea. I don’t know if Jack was seeing it like I was and he didn’t know that this was my mom’s favorite part of the trail and that I could feel her with us. Danny was up ahead and Billy in the middle of the pack. My gluteal muscles were burning and my heart was starting to pump. The hike was starting to get strenuous, especially with Jack on my back. Danny and I swapped half way through the hike and when I put Fiona on my back I felt like I wasn’t carrying anything at all.

As we were hiking I fantasized and talked to Danny about going back packing next summer with the babies and taking them camping. I told Danny the story about Mom taking us hiking on Palomar mountain, showing me coyote poop and telling me you can tell what a coyote had for dinner by his poop, this one had rabbit. That was such a transformational moment for me on the dirt path with the rocks and my mom taking the time to take us there and tell me about coyote poop. I don’t know why but I think about that moment all the time. Yesterday thoughts ran through my head, the same thoughts I’ve had many times before, I love hiking more than anything, there’s nothing I’d rather be doing than hiking. When I got home I wondered, is hiking my favorite thing to do? I love being out in the trees on a trail far away from houses and cars. Jack and Fiona love it too and by next summer I hope to have them walking a lot more on their own!

Jack and Fiona can no longer be fenced in!