GAP, (The Global Art Project) is a group of artists living in many countries around the world. We work on collaborative projects by mailing “FRAGS” (scraps of old work ripped up, studio floor finds, collections of tickets, maps, ect.) to each other. We then work on collage and mixed media in our own studios. GAP also organizes yearly residencies where members get to meet face to face and work together. GAP has in the past and is currently working on several collaborative sketchbooks, we call our collection of sketchbooks “DISLOCATIONS”. When I saw the BROOKLYN LIBRARY SKETCHBOOK PROJECT, I thought it was perfect for GAP! I initiated and curated the project, along with Carl Heyward, the founder of GAP. I originally ordered one sketchbook, but after I received so much interest in participation from fellow GAP members and I saw how little the sketchbook was I ordered a second one. The first Sketchbook I named Volume One. That traveled the United States and was originally SOLO work. But when the book was finished and returned to me it had grown very thick. I had to make some executive decisions and edit some pages. I used “FRAGS” from the edited pages and in the end almost every page is a collaboration. Volume Two went to Europe first. Switzerland, then Belgium, Spain, and made several stops in the U.S. before it was returned to me. Again, I had to edit and rework the book. It had grown too thick again! I had so much trouble with this sketchbook that in the end it only has four pages. I ordered a third book, Volume Three. This final volume traveled to Senegal in January for a GAP residency. Participants at the residency added to the sketchbook over the course of their stay in Senegal. Carl Heyward returned the last Sketchbook to me when he returned from Senegal and fortunately Volume Three did not need to be edited or re-worked! 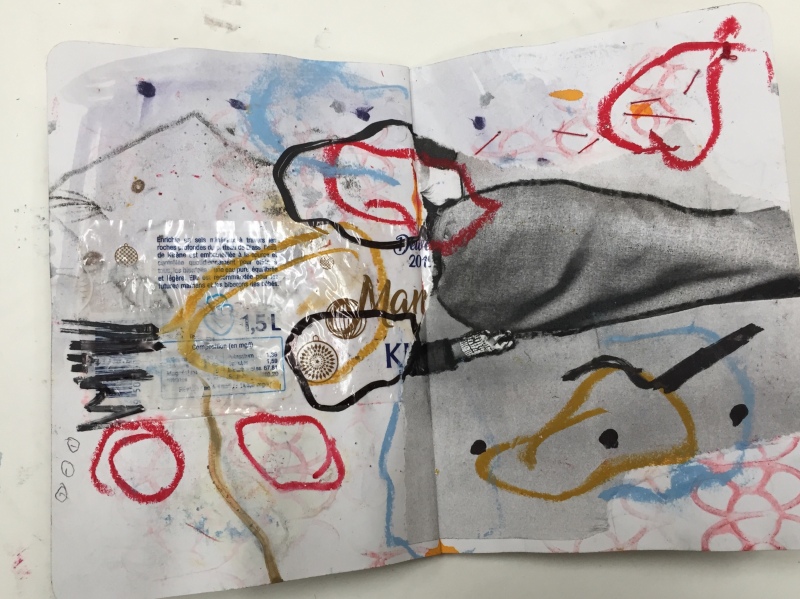 It was a super fun, but a stressful project for me. I love how the books turned out and hope they make the cut as far as size requirement. I learned a lot about curating an art project that involves over twenty people. Also coordinating the shipping and the documentation. I set up a Brooklyn Art Library Sketchbook Project Facebook page for GAP and my goal was to have everyone document their entries so we could watch the book evolve. It was somewhat successful, but there were definitely issues that I will be aware of next time!