This will be one of those blog posts that people read and say “oh my gosh, you seem really stressed!” I do feel stressed today and I just can’t understand why Jack and Fiona can’t understand the toilet bowl cleaner and plunger are grost! Fiona had a HUGE poopy diaper, I have her on the changing table trying to clean her up and Jacks messing with the black rubber plunger. “NO Jack! That’s the most yucky thing you could possibly do!” He completely ignores me. I have a tantrum, “NO! Stop! WHY!” All while cleaning Fiona and keeping her still on the changing table. Snapping. It’s the most difficult time in a while with the double whammy of PMS and Perimenopause. I try not to talk too much about these issues to spare any male readers of this subject that is uniquely woman. But today I say screw it, sorry men I’m gonna lay a few things out there, I deserve a rant now and again. My first thought is “It’s not fair” this hormone stuff women have to go through. It’s extremely difficult, especially now with kids. I don’t think my husband understands how I feel, he just thinks I’m either in a bad mood or mad at him. I may be wrong of course, I haven’t asked him. When he asks how I slept I just say fine, I spare him the details of hourly episodes of extreme heat all up and down my legs and cheeks, sweat beads down my chest as I lay still and quiet in the night. Hormone fluctuations suck! What’s worst is the way I feel about the subject, or at least how I’ve been made to feel about the subject. With the “It’s just PMS” or “It sucks getting older” just writing these things off because only half the population gets them and they pass in time. Then I’m back to “normal” again. But PMS and Perimenopause are normal. It’s most uncomfortable for me but I constantly feel guilty about feeling this way, not being my bubbly self. 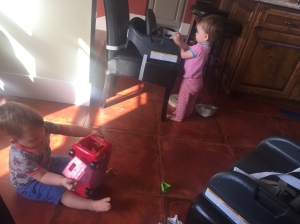 I have the added stress this week of my dad being in town. He called last night when he was dropped off at the motel by my brother. He said he was calling to say “Thank you for the accommodations.” But what he really wanted was Alan to go to his motel, pick him up, take him to store, “To get hangers for one thing” and drive him back to the motel. After holding the phone away from my mouth to have one of the best uncontrollable laughs I’ve had in a long time, I said “No, sorry.” I told him he could walk, it’s across the street, but he said Betty’s breathing problem prevented them from doing that. I’m going to pick them up today and drop them off at the store while I do Yoga. I’m dreading this week. I rarely dread weeks, it usually only happens around family stuff. I’ll be fine though, I just might feel guilty because I am not going to be my dad and Betty’s personal taxi cab or event planner. I just can’t do it, especially with jack and Fiona. It’s too much.